Holy Spirit Prayer Group at Our Lady celebrated their return from COVID with a luncheon in Father Gresham Hall on Tuesday, June 29th. See pictures below.

The prayer group meets the second and fourth Tuesday of each month at 1pm in Fr. Gresham Hall. On the months with a fifth Tuesday, the group has a luncheon with fellowship.

Contact Bill Kilgore at wjkilgore84@gmail.com, or Helen Lenahan at 901-570-0970 for more information.

Sent from my iPhone

In his Angelus address June 27, the pope said that intimacy with Jesus was the path to inner healing.

“And if you have already felt His tender gaze upon you, imitate Him; do as He does. Look around: you will see that many people who live beside you feel wounded and alone; they need to feel loved: take the step.”

He continued: “Jesus asks you for a gaze that does not stop at the outward appearance, but that goes to the heart; a non-judgmental gaze — let’s stop judging others — Jesus is asking us to gaze not judging, but welcoming. Let us open our hearts to welcome others. Because only love heals life.”

He reflected on the day’s Gospel reading, Mark 5:21-43, in which Jesus heals a woman afflicted with hemorrhages for 12 years.

The pope suggested that the woman’s suffering was not merely physical, but also emotional.

“More than her health, her affections were compromised. Why? She had blood loss and therefore, according to the mindset of the time, she was deemed impure. She was a marginalized woman,” he said.

“She could not have stable relationships, a husband, a family, and normal social relationships because she was ‘impure,’ a disease that made her ‘impure.’ She lived alone, with a wounded heart.”

The pope argued that life’s greatest disease was not cancer, tuberculosis, or the coronavirus.

“No,” he said, “The most serious illness in life is a lack of love, and not being able to love. This poor woman was sick, yes, of blood loss, but, as a consequence, of lack of love, because she could not be with others socially. And the healing that matters most is that of the affections.”

He said that everyone could see themselves in the nameless woman.

“The text says that she had tried many treatments, ‘had spent all that she had, and was no better but rather grew worse,’” he said.

“We too, how often do we throw ourselves into mistaken remedies to sate our lack of love? We think that success and money make us happy, but love cannot be bought, it is free. We hide in the virtual, but love is tangible.”

“We do not accept ourselves as we are and we hide behind external facades, but love is not an appearance. We look for solutions from magicians, from gurus, to then find ourselves without money and without peace, like that woman.”

He explained that the woman finally found healing by touching Jesus’ garment, entering into direct, physical contact with him.

“Especially in this time, we understand how important contact and relationships are. The same counts with Jesus: at times we are content to observe some precepts and to repeat prayers — many times like parrots — but the Lord waits for us to encounter him, to open our hearts to him, for us, like the woman, to touch his garment in order to heal. Because, by becoming intimate with Jesus, we are healed in our affections,” he said.

The pope stressed that the Gospel story showed that Jesus welcomed direct contact because it recorded that he looked around the crowd to see who had touched him.

“This is Jesus’ gaze: there are many people, but He goes in search of a face and a heart full of faith. He does not look at the whole, as we do, but at the individual. He does not stop at the wounds and mistakes of the past, but goes beyond sins and prejudices,” he commented.

He said that Christ also looks beyond our sins to heal us, while we often judge others based on appearances and speak ill of them.

In the gospel story, he said, Jesus healed the woman, tenderly calling her “daughter,” praising her faith and restoring her self-confidence.

After praying the Angelus, Pope Francis noted that June 29 marks the Solemnity of Sts. Peter and Paul. The apostles, who were martyred in Rome, are the patron saints of the Eternal City and the day is a regional public holiday.

“Today, as we approach the Feast of Sts. Peter and Paul, I ask you to pray for the pope. Please pray in a special way: the pope needs your prayers! Thank you. I know you will do so,” he said.

The pope observed that Catholics in the Holy Land marked the inaugural annual “Peace Day for the East” on Sunday.

He said: “May the Lord support the efforts of all those who are working for dialogue and fraternal coexistence in the Middle East, where the Christian faith was born and is alive, despite suffering. May God grant those beloved peoples constant strength, perseverance, and courage.”

He offered his condolences to the families of victims of a tornado in the Czech Republic that killed five people and injured more than 150 others on June 24.

“I pray for the dead and injured and for those who have had to leave their homes, which have been seriously damaged,” he said.

Finally, he greeted locals and pilgrims to Rome.

“May your visit to the tombs of Sts. Peter and Paul strengthen your love for Christ and for the Church,” he said, before wishing those in the square below a happy Sunday.

*   Break forth in joyful shouts of joy for you have the victory that has been won for you.

*   I am with you all and your families. Reach out to me and lean on Me. I am there for you every moment.

*   There is a quiet place within you which you need to go daily to be renewed.

*   My blessing upon each of you and your families.

A Conversation With The Lord:  —-   Jesus, what is on my mind is the Renewal; and how we are to fan into flame your Fire of Divine Love.

*   Jesus’ Answer:  —-   So much must happen for the tenders to catch fire.  World events need to turn around and seek my face.  My fire can only ignite the wood that is dried up of self.  Then I can fan into flame the fire that will produce a heat & light that will warm people’s hearts and illuminate their souls.  My love & light will cause a transformation, not only in them, but also those who are in contact with them.  My love, healing and light is spread from one bonfire to another, until the whole world is set on fire.

*   Listen now with all your heart for the words I am telling you!

CARLENE:
Jesus, what’s on my mind is the Renewal; how to fan into flame the Fire of Divine Love.
JESUS’ ANSWER:
SO MUCH MUST HAPPEN FOR THE TENDERS TO CATCH FIRE.  WORLD EVENTS NEED TO TURN AROUND AND SEEK MY FACE.  MY FIRE CAN ONLY IGNITE THE WOOD THAT IS DRIED UP OF SELF.  THEN I CAN FAN INTO FLAME THE FIRE THAT WILL PRODUCE HEAT & LIGHT –THAT WILL WARM PEOPLE’S HEARTS AND ILLUMINATE THEIR SOULS.
MY LOVE & LIGHT WILL CAUSE A TRANSFORMATION, NOT ONLY IN THEM, BUT ALSO THOSE WHO ARE IN CONTACT WITH THEM.  MYLOVE AND HEALING & LIGHT IS SPREAD FROM ONE BONFIRE TO ANOTHER,  UNTIL THE WOLE WORLD IS SET ON FIRE.
JESUS 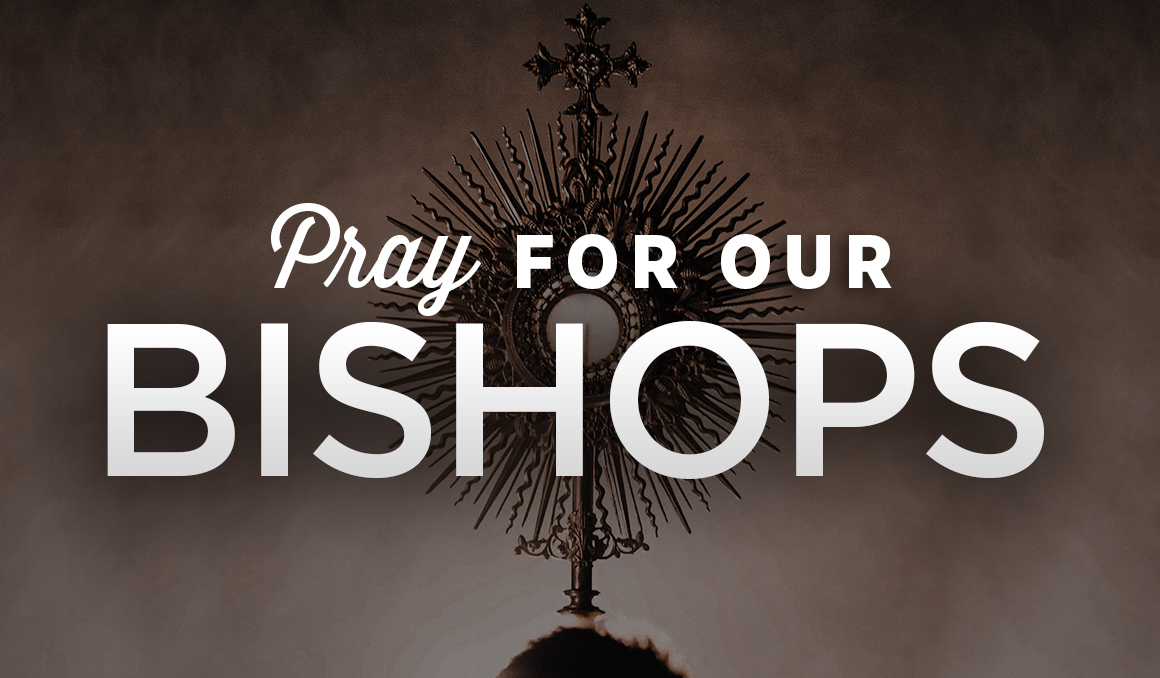 We’re rallying hundred of thousands of Catholic to pray for a very special intention: our bishops.

In just 9 days, the bishops of the United States will gather (virtually) for their biannual meeting to pray, collaborate, and work together on issues important to the Church in America. Their agenda includes discussion of various liturgical translations as well as a pastoral “framework” on marriage and family life ministry.

But the Bishops are also expected to take up another big issue: “eucharistic coherence.”

In sum, many of our bishops recognize that far too many Catholics have never been taught, do not understand, or simply do not appreciate the beauty and the mystery of the Holy Eucharist. The sacred body and blood of Our Lord in the sacrament of Holy Communion is the source and summit of our Christian life. Yet widespread misunderstandings, errors, and outright scandal and heresies persist everywhere, from everyday lay people, to priests, politicians, and even presidents.

Something must be done. Which is why we are urging every Catholic in America to pray the Holy Rosary, or the Corpus Christi Novena for the next nine days. Pray that our Bishops have the courage to persevere — and to act.

Many Catholics have been praying and calling for some kind of intervention for years, even decades. Meanwhile the threats posed to the beauty and integrity of the sacrament, even the integrity of the Church itself, have only grown worse.

The Bishops are expected to vote on whether to move forward with the drafting of a “teaching document” to help bring much needed clarity to the many misunderstandings about the nature and gift of the sacrament. Their aim is not to condemn, but to help renew a much needed appreciation of the Eucharist as the center of our Christian lives.

Partisans and so-called progressive Catholic voices are already working overtime to scuttle the plans. Even Cardinals and some bishops are urging that the subject be put off until the Bishops meet again in person. Doing so could push back the release of any document 18 months or even 2 years!

Meanwhile the predictable agitators are using terms like “culture warrior bishops,” or the “weaponization of the Eucharist.” The mainstream media is likewise adding to the confusion, framing next week’s meeting as a politically motivated broadside to punish Joe Biden. It’s all nonsense.

The issue is simple: protecting the beauty and integrity of the Eucharist, by rekindling a love and respect for the sacrament that applies to everyone, from the simplest Catholic to prominent public officials and leaders.

If we truly believe what we profess, then it’s time to get serious.

Please join us in praying for our bishops for the next 9 days.

In case you have lost earlier versions I am including one.

Father Most Holy, you are the source of all life, all hope, all grace. Pour out your Holy Spirit anew upon me, upon your Church, upon the whole world.

Lord Jesus, the Holy Spirit is your first gift to those who believe. Send fourth once again your Spirit to fill the minds and hearts of your disciples.

Holy Spirit, you are the Paraclete, the Consoler. Come, kindle in us the fire of your Divine Love.

You, of comforters the best; You the soul’s most welcome guest;

In our labor, rest most sweet; grateful coolness in the heat;

solace in the midst of woe.

O most blessed Light divine, shine within these hearts of Thine,

and our inmost being fill (from the Sequence for Pentecost Sunday).